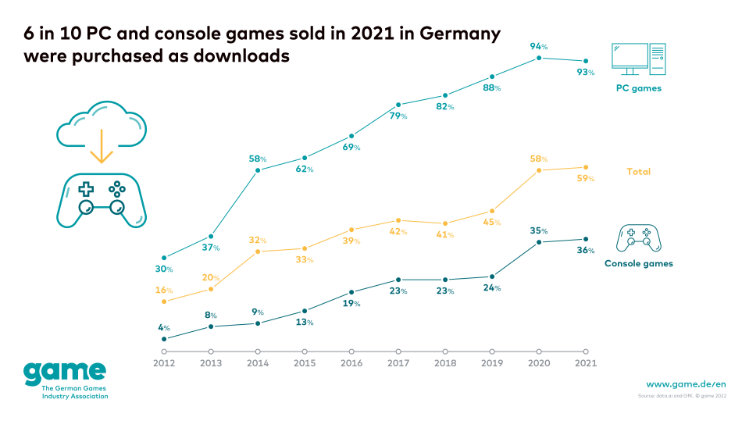 Berlin, 2 August 2022 – Following a sharp increase in the first Covid-19 year 2020, the share of games purchased as downloads stabilised in 2021: the share of all PC and console games sold in Germany that were purchased as downloads increased by just one percentage point compared to the previous year, to 59 per cent. This means that roughly six in ten computer and video games were once again purchased as downloads last year. These are the figures released today by game – the German Games Industry Association, based on data collected by the market research company GfK. There were major differences in the share of downloads for different platforms and price categories, with downloaded games making up a particularly large percentage of the lower-priced titles. Approximately eight in ten games priced below 30 euros were purchased as downloads. Higher-priced titles were more likely to have been purchased on physical media, with players buying 68 per cent of all games costing over 30 euros on data carriers from online shops or bricks-and-mortar stores in 2021.

Players of PC games in particular relied on downloads, for example from portals like Origin and Steam. As a result, downloads accounted for around 93 per cent of PC game sales. Nearly two thirds (64 per cent) of all games for video game consoles such as Nintendo Switch, PlayStation and Xbox, on the other hand, were purchased on physical media.

‘Thanks to their excellent accessibility, download purchases have established themselves as the preferred choice of many players. Even so, there continue to be large differences between the various gaming platforms. Download purchases can be an attractive option for players of PC games, for example, on account of online discounts or the wide range of indie games on offer. Console fans, on the other hand, like to purchase games on physical media, whether it be to add to the collection of games on their shelves or to obtain limited-edition games boxes containing special items for fans,’ says Felix Falk, Managing Director of game. 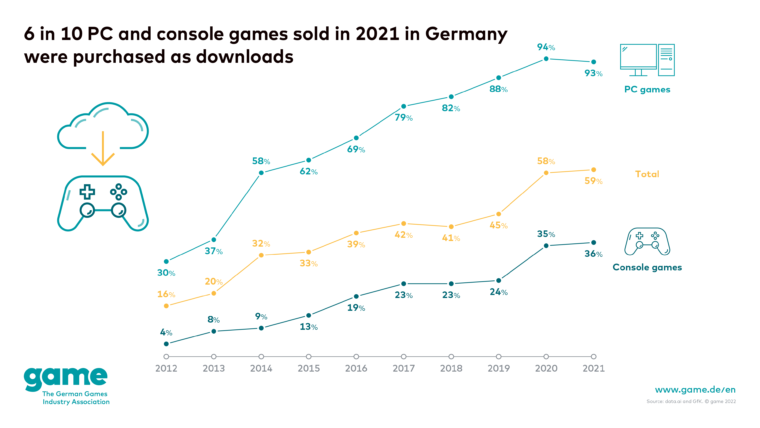