game – The German Games Industry Associatopn is co-organizer and conceptual sponsor of gamescom, Europe’s trade fair and event highlight for interactive entertainment. As a premiere trade fair, important German, European and world novelties are presented within the scope of gamescom. The combination of trade fair and public event makes the fair a unique entertainment experience for every visitor. Since 2009, the trade fair has usually taken place in Cologne in August of each year. The service provider for the organization and implementation is Koelnmesse GmbH, which with a total of 284,000 square meters of space has one of the largest and most modern exhibition centers in Germany. In 2019, around 370,000 people visited the stands of 1,153 companies and organizations from 52 countries, more than ever before.

gamescom connects the entire value chain of the industry, from developers and publishers to retailers and consumers, and creates forums for discussion at all levels. The entertainment area is aimed at the video game-enthusiastic private public. It comprises four modern exhibition halls with approximately 80,000 square meters of space and has an indoor and an outdoor area. Here, gamescom visitors can try out the latest video gaming software and hardware. The business area offers space exclusively for exhibitors, trade visitors and the media. Due to the excellent infrastructure, this area is a forum for successful business and intensive discussions. The business area is the meeting point for the more than 30,000 trade visitors to the fair.

Also essential parts of gamescom are the gamscom congress and the devcom. 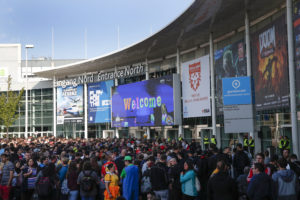 The gamescom congress is Germany’s largest congress on digital video games and an interface to other cultural and creative industries as well as to the digital economy and politics. Both the state of North Rhine-Westphalia and the city of Cologne sponsor the congress. Increasingly, economically relevant spill-over effects as well as cultural issues arise for diverse industries from the computer and video games industry. The gamescom congress is Germany’s platform that promotes and stimulates the necessary exchange and controversial discussions, both in terms of location and in an international context.

The congress is recognized as an official training event for teachers and other educators.

In addition to these main pillars, gamescom offers a diverse supporting program. The gamescom festival offers concerts, music and entertainment in Cologne’s city center, which is always transformed into a festival mile.

The gamescom Award honors the best video games at the fair. All companies exhibiting at the fair can submit their video games for the award and are eligible to participate, provided that the release date of the video game on the German market is not before the start of the event and the video game can be seen and tested by the public in the entertainment area.

Protection of minors and media competence

The video games industry also accepts its responsibility for the protection of minors at the trade fair. The provisions of the German Youth Protection Act will be consistently implemented in the exhibition areas and young visitors to the trade fair will be comprehensively protected from dangerous video game content. For example, age checks are carried out at exhibitors’ stands.