Games are the most progressive medium of our age: they are cultural assets, drivers of innovation and economic commodities in equal measure. Not only do they blend all previous forms of media, language, text, sound and moving images – they also add their unique element of interactivity to all these aspects, combining playfulness and social interaction to create a very special experience. Consequently, the games industry is home to numerous different stakeholders, with game developers and publishers leading the way. The ecosystem of the games industry also encompasses many other important players, such as educational establishments, service providers, trade partners, investors and the media. For further information regarding the games industry in Germany, please feel free to have a look at our Guide The German Games Industry . 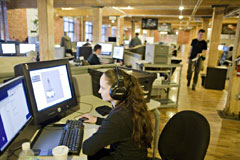 In today’s games industry, the delineations that once existed between traditional development studios and publishers have increasingly disappeared. The availability of production tools and facilities at a range of different price points means that games can be developed by little two-man studios as well as teams with hundreds of specialists. Download portals have made it easier than ever to distribute a digital game around the world. This shift in production and distribution opportunities has led to an unprecedented diversity in games and the studios that develop them.

Publishers are increasingly creating games themselves, with large in-house development divisions that often have game production budgets of hundreds of millions of euros; these in-house productions are then distributed around the world. In the browser and mobile games market, on the other hand, many titles are sold via online portals operated directly by the companies that develop the games, or are offered as downloads in app stores. Many of these games have remained on the market for several years now, giving fans the opportunity to enjoy them over the long term. What’s more, even small, independent teams of developers can use new forms of financing such as crowdfunding to acquire the resources they need to create their own games and make them directly available to customers around the world via download platforms. And some of the most successful crowdfunded games projects have come out of Germany.

The dynamic development of the computer and video games industry is constantly generating new opportunities for cities and countries around the world to become internationally renowned as hubs for development. Germany, for example, established itself as an important location for the development of sophisticated strategy games, management simulations and point-and-click adventures, which were particularly popular within the domestic market. With the rise of online and browser games and the commercial success of game apps for smartphones and tablets, however, the trend began to shift: companies founded in Germany, in particular, were extremely successful in this sector, even on the international market. A number of independent developers also made a name for themselves around the world with their PC and console games.

Today, there are approximately 500 companies based in Germany that develop or publish games, or provide a combination of both. The game development hotspots in Germany include Berlin, Hamburg, Munich, the Rhine-Main region (Frankfurt) and North Rhine-Westphalia (Cologne, Düsseldorf). Our ‘gamesmap’ provides an overview of the industry’s locations and companies.

The games industry is a central component of the cultural and creative sector in Germany, which employs approximately 11,000 people in around 600 companies. If you include the people who are employed in the broader value chain of the games industry – such as retail salespeople, journalists, researchers, or employees of government agencies and institutions – the number of jobs created by the computer and video games industry increases to approximately 28,000. Particularly in the regions of North Rhine-Westphalia, Bavaria, Rhine-Main, Hamburg and Berlin, digital games are a driver of new jobs. German companies have made a name for themselves internationally and currently export their games to more than 50 countries around the globe.

The most important professions in the game development industry include game designers, programmers, graphic designers and producers. Many educational establishments – both private and public – offer courses of study and degree programmes specifically tailored to the games industry. If Germany is to maintain and strengthen its position as an important location for game development and meet the industry’s demand for skilled personnel over the long term, the range of educational programmes on offer will need to be expanded in consultation with businesses. Our Games Education Directory provides an overview of the available courses of study tailored to the games industry.