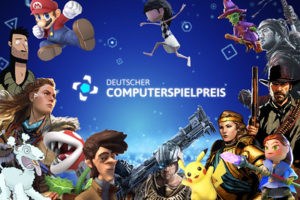 The German Computer Games Awards (Deutscher Computerspielpreis, DCP) are endowment awards presented jointly by the public and private sectors, sponsored by the German Federal Ministry of Transport and Digital Infrastructure (BMVI) and game (association of the German games industry). The awards were launched by the German federal government on the initiative of the German parliament, in partnership with both trade associations. The focus is on promoting innovative, culturally relevant or educational computer and video games primarily produced in Germany. Another important aspect of the winning games is, of course, that they are fun to play.

An independent jury of experts decides on which games receive the awards in a total of 15 categories, three of which are international categories. A game chosen by the public also receives an award. The DCP is the most important award in the German gaming industry. The awards include total prize money of 590,000 euros (2020 DCP), half of which is provided by the BMVI and the other half by the association game. It is the highest endowment for digital games in Germany. The awards are presented annually, with alternating ceremonies in Berlin and Munich.

Maren Raabe
Head of Public Affairs
+49 30 240 8779 15
maren.raabe@game.de
This Website uses cookies. By using our service you agree to the usage of cookies.Accept