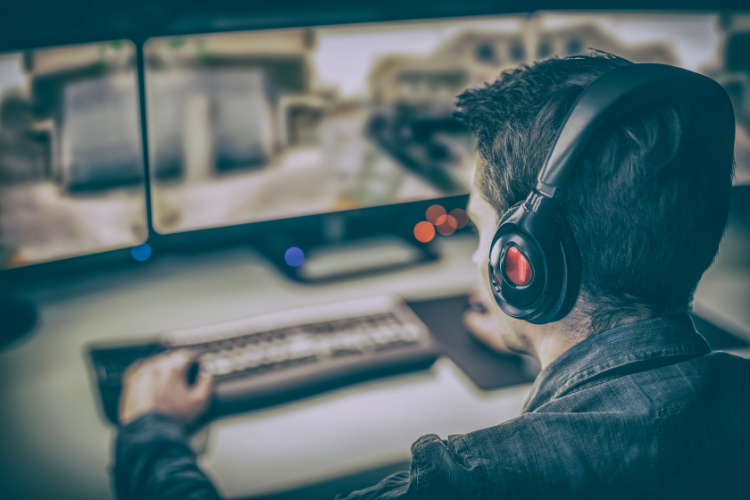 • German games industry tops the 6-billion-euro mark
• In-game purchases and fees for online services are growth engines
• ‘The dynamic growth shows once again that games are one of the most important drivers of the digital world.’

Berlin, 23 April 2020 – The German games market registered continued significant growth in 2019: sales of games hardware and software rose by 6 per cent overall, to around 6.2 billion euros. These are the figures released today by game – the German Games Industry Association, based on data collected by GfK and App Annie. Sales of games hardware, including consoles, gaming PCs and accessories, dropped by 2 per cent from the previous year, to 2.4 billion euros. In contrast, the market for games software showed a gain of 11 per cent: in 2019, a total of about 3.9 billion euros was spent on computer and video games and the fees for the respective online services. 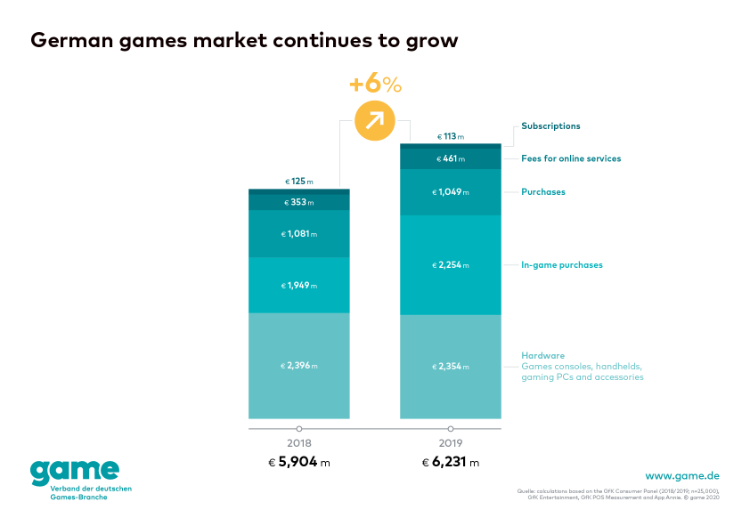 ‘The German games market developed amazingly well in 2019,’ says Felix Falk, Managing Director of game. ‘Up to now, the years at the end of a console generation have been comparatively weaker economically. But we aren’t seeing any of that now. Revenue models like in-game purchases and fees for online services have become important columns for the games market. This means that, alongside the classic purchase of computer and video games, the long-term use of game titles is playing an ever greater role. The dynamic growth shows once again that games are one of the most important drivers of the digital world.’

Sales through fees for online services showed the strongest percentage growth in 2019, rising by 31 per cent, to 461 million euros. These include, among other things, costs for the online services of games consoles such as Nintendo Switch Online, PlayStation Plus and Xbox Live Gold. Also in this category are subscription services like Origin Access Premiere (EA) and Uplay+ (Ubisoft), which charge a fixed monthly rate for access to a large library of games, as well as sales for cloud gaming offerings like Google Stadia and PlayStation Now. Sales through in-game purchases also grew sharply in 2019: compared to 2018, this submarket increased by 16 per cent, to around 2.3 billion euros. In-game purchases include both small charges – to better equip one’s game character, for example – and more expensive content like whole additional campaigns and season passes. Declines were posted in other market segments, however, such as the one-time purchase of computer and video games (-3 per cent, to around 1 billion euros) and subscription to individual game titles (-10 per cent, to around 113 million euros).

When further dedicated games hardware like gaming PCs and the corresponding accessories are taken into account, the market size for 2018 is larger than was communicated last year.

We are the association of the German games industry. Our members include developers, publishers and many other games industry actors such as esports companies, educational establishments and service providers. As a joint organiser of gamescom, we are responsible for the world’s biggest event for computer and video games. We are an expert partner for media and for political and social institutions, and answer questions relating to market development, games culture and media literacy. Our mission is to make Germany the best games location.