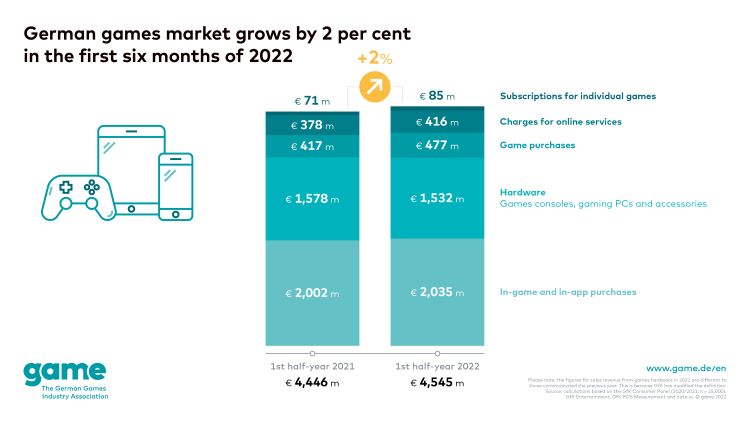 Berlin, 16 August 2022 – The German games market is running into headwinds: following sharp gains in sales of games and corresponding hardware in previous years, growth slowed significantly over the first six months of 2022. Whereas the German games market grew by 22 per cent over the first six months of 2021, growth had slowed to just 2 per cent during the same period one year later. As a result, sales revenue from purchases of computer and video games and games hardware over the first six months of 2022 amounted to about 4.5 billion euros. This was announced today by game – the German Games Industry Association at the gamescom press conference. The world’s biggest games event will be taking place in person again in Cologne next week. This data is based on surveys carried out by the market research companies GfK and data.ai. In fact, the growth drivers of previous years such as sales in the field of game apps actually experienced a decline in the first six months of 2022. In-app purchases generated 1.3 billion euros in sales revenues, approximately 7 per cent less than in the previous year. Revenue from in-game purchases for PC and console games, on the other hand, rose particularly sharply. This submarket experienced growth of 24 per cent compared to the same period of the previous year, rising to 705 million euros. Subscriptions for individual games (+19 per cent, to 85 million euros) and fees for online services (+10 per cent, to 416 million euros) also helped to make up for falling sales revenues in other areas. In the field of games hardware, continuing supply chain difficulties meant that the gaming PCs and laptops segment was the only one to experience growth. Here, turnover increased by 10 per cent, to 479 million euros, in the first six months of 2022. 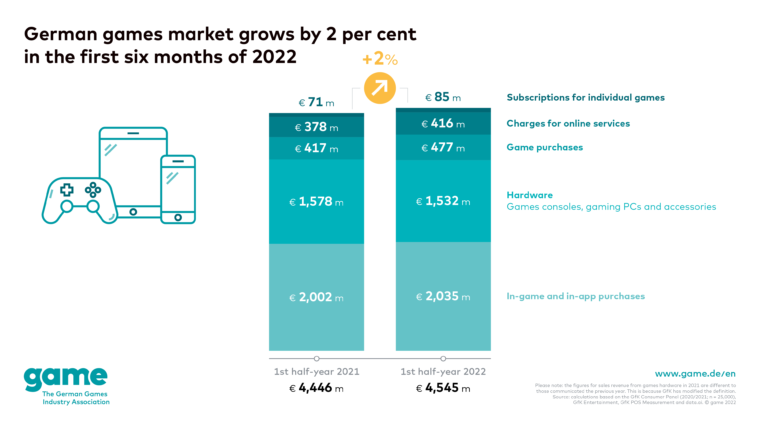 ‘The long-term effects of the coronavirus pandemic, numerous postponements of new titles, delivery bottlenecks and general deterioration in the economic outlook have also left their mark on the games market. Following the particularly strong growth of the last two years, especially in comparison to the far more difficult situation facing many other industries, the games industry continues to be in a good position,’ says Felix Falk, Managing Director of game – the German Games Industry Association. ‘This resilience is also closely tied to the incredible relevance of computer and video games, which has long since expanded far beyond the actual games market itself. There are innumerable examples of this phenomenon, particularly in popular culture, where games have come to exert a great deal of influence. More and more people now recognise this relevance and appreciate the tremendous potential that games hold for society, something that is even better news for the industry.’

The theme of gamescom 2022, ‘Games: at the heart of pop culture’, highlights the incredible relevance of this medium far beyond games themselves. Games are more than just the most successful entertainment medium of our time – they have also established themselves at the very heart of popular culture, with other media and fields increasingly taking their cue from games. This is underscored by a new representative survey conducted by the market research institute YouGov on behalf of game, according to which more than 6 in 10 Germans (62 per cent) have watched films or series or purchased toys, books or clothing based on games brands. In fact, nearly half the people in Germany (48 per cent) have watched films based on games, and both soundtracks and television series related to games are frequently consumed. 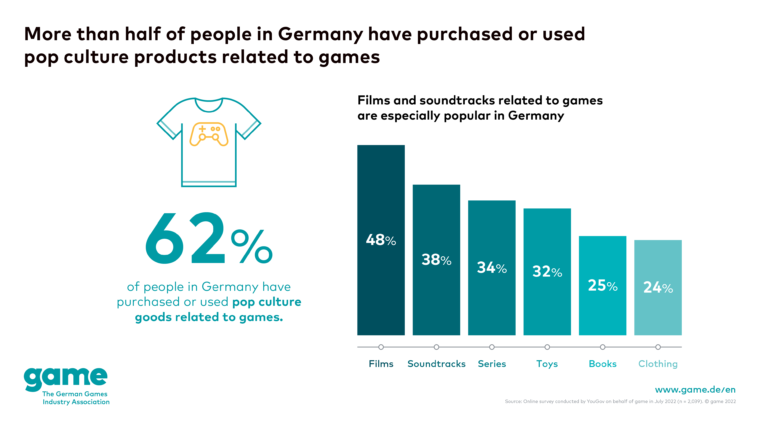 The next generation of mobile gaming

Smartphones have established themselves worldwide as one of the most successful games platforms. The gamescom trend ‘The next generation of mobile gaming’ pays tribute to the fact that today’s devices are so good that they are even suitable for more complex games. Millions of Germans share this view: approximately 1 in 2 players (48 per cent) says that the technical quality of mobile games is getting closer and closer to that offered by PC and console games. As a result, nearly 4 out of 10 players (38 per cent) here in Germany are playing games on mobile devices more often. Thanks to this sharp increase in the quality of game apps, 1 in 3 players in Germany (33 per cent) believes that mobile esports on smartphones will play an increasingly important role in future. This demonstrates that the trend that began in Asia is continuing its expansion in Europe. For example, this year’s gamescom will also be hosting a mobile esports tournament. 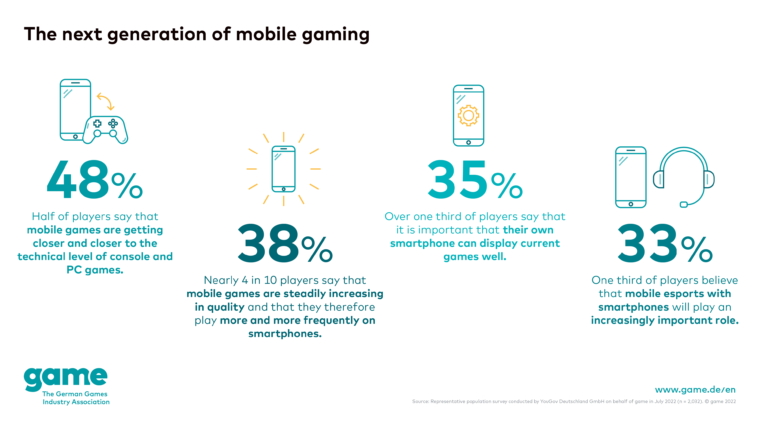 Be it gamified fitness apps or movement games, people have been keeping fit with games for quite some time now. Now computer and video games are increasingly being used as a means of improving mental health as well, something that is reflected in gamescom’s ‘Healthy through games’ trend. Germans put a lot of faith in games when it comes to health, with 19 million Germans in all believing that computer and video games can be beneficial to mental health. This belief is particularly strong among the young, with nearly half of 16- to 24-year-olds (46 per cent) stating that games can help improve people’s mental health. Video game players in Germany are especially convinced of games’ potential when it comes to memory training (78 per cent), relaxation (75 per cent) and improving well-being (60 per cent). A large majority recognise games’ positive impact on these spheres. 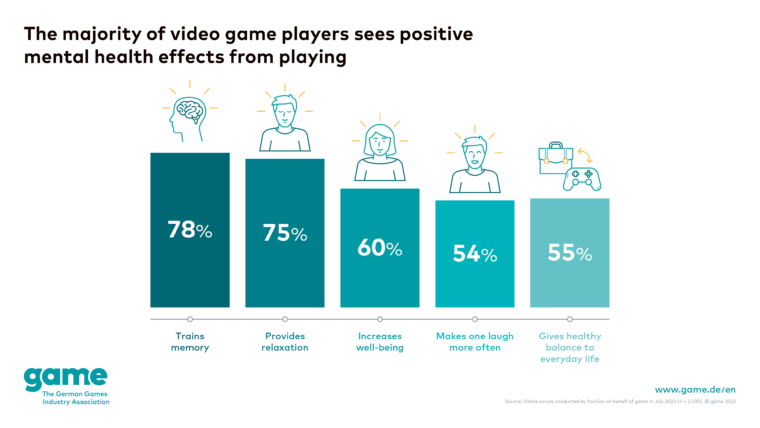 Please note: GfK has modified the definition of gaming PCs. In order to make it easier to compare data, this new definition has also been used for the market data from 2021, whereby the figures for gaming hardware in 2021 that result are somewhat lower than those that were communicated one year ago.

The data used is based on an online survey commissioned by game and carried out by YouGov Deutschland GmbH. 2,039 people were interviewed for the survey, which was conducted between 26 July and 1 August 2022. The results were weighted and are representative of the German population aged 16 and older.