Berlin/Cologne, 18 August 2020 – With the guiding theme ‘Playing into the future’, gamescom 2020 focuses on the many positive societal effects of games and the games industry – influences which during the COVID-19 pandemic have again become particularly clear. Just how strongly games have helped in this time can be seen in a representative survey presented today at a gamescom press conference in Cologne. Conducted by YouGov on behalf of game – the German Games Industry Association, the survey found that about one quarter of all players in Germany (27 per cent) say that they have played together with family and friends more often during the coronavirus pandemic than usual, while 28 per cent say that games have helped them in getting through the pandemic. Overall, a large share of Germans ascribe games a special role during the COVID-19 pandemic: around 4 in 10 Germans (43 per cent) say that games can help people to better cope with such crises. Almost two thirds say that games have brought people enjoyment during the pandemic.

‘Games are a unique social medium, connecting billions of people all around the world,’ says Felix Falk, Managing Director of game. ‘Especially in this extraordinary year, the social characteristics of games are more important than ever for millions of people. Games have helped them to weather the coronavirus pandemic better, to stay in contact with family and friends and to have fun. In a time in which solidarity and good digital solutions are urgently needed, we’re pleased that gamescom, along with its many dedicated partners, has succeeded in putting together a comprehensive and varied programme with a unique digital concept. The community can look forward to world premieres and many announcements, with current trends like the new consoles playing just as big a role as digital education.’

One of the top trends of this year’s gamescom is the new generation of games consoles. The current models’ successors, the Sony PlayStation 5 and the Microsoft Xbox Series X, are scheduled for release at the end of the year. Several months in advance, interest is already running very high, with nearly 4 of 10 Germans overall and as many as 5 in 10 gamers already having heard of the new models. And even before delivery of the first consoles to retailers, around 8 million Germans already have plans to purchase one. 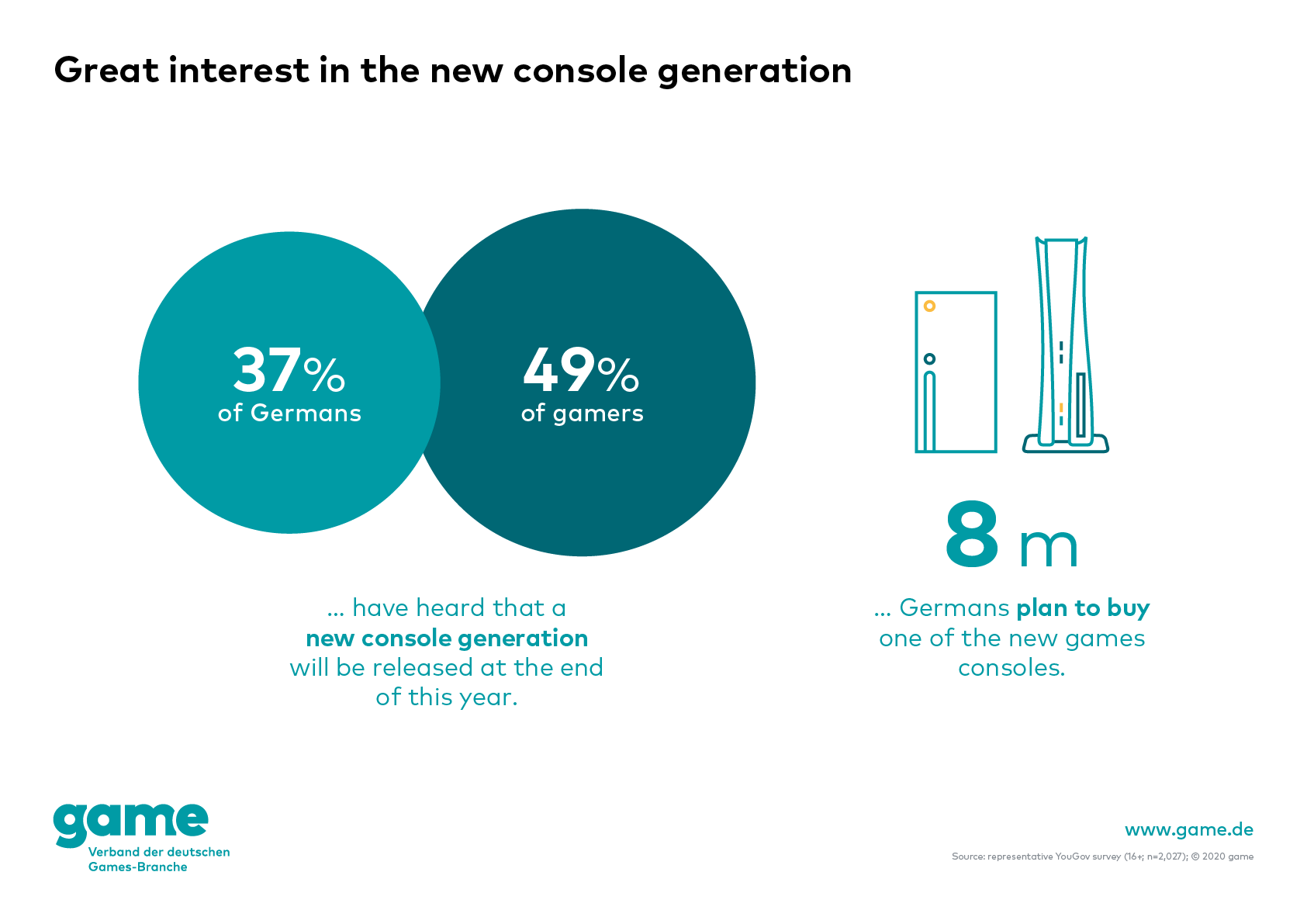 Digital competency should be taught in schools

Serious games, or educational games, are finding favour with ever more parents and children. This trend has only been accelerated by school closures due to the coronavirus. Up to now, however, games of this kind have been played above all at home and in the private sphere. A majority of Germans believe such educational games should also be employed more strongly in schools and digital competency more firmly anchored in the curriculum overall. 6 in 10 Germans say the COVID-19 pandemic has shown that Germany should be further advanced than it is in the use of serious games in schools. 70 per cent of Germans expect basic programming skills to be taught early in school. 77 per cent additionally believe schools should impart to pupils the necessary digital competency to deal with digital media responsibly. Yet the majority of Germans don’t seem optimistic that this is happening consistently: about three quarters (74 per cent) say that most schools in Germany aren’t adequately equipped with the technology to make such teaching possible. 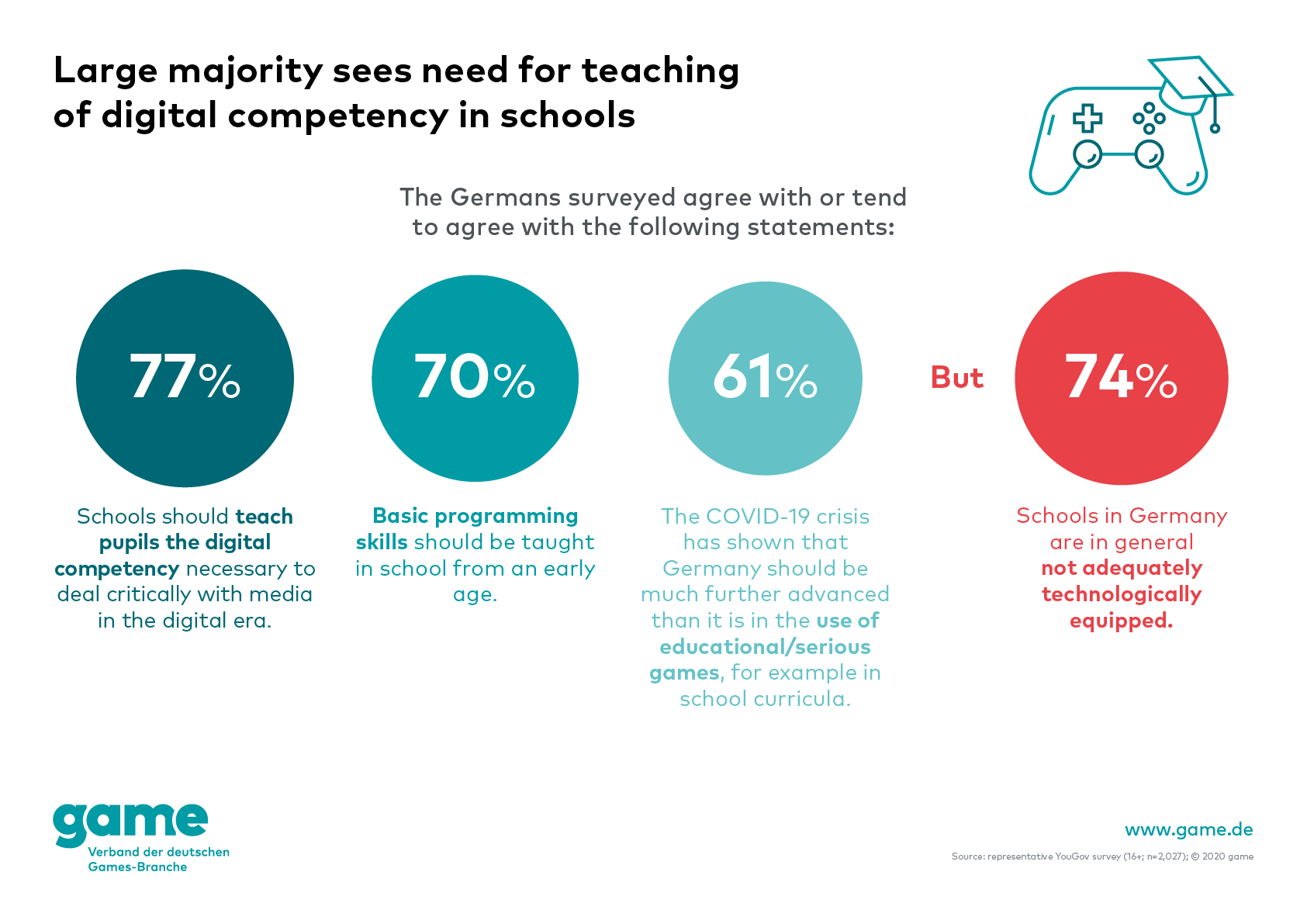 The data used is based on an online survey by YouGov Deutschland GmbH. In the survey, conducted between 27 July and 1 August 2020, 2,027 people were questioned. The results were weighted and are representative of the German population aged 16 and older.

gamescom is the world’s largest event for computer and video games, as well as Europe’s largest business platform for the games industry. Due to the worldwide COVID-19 pandemic, gamescom 2020 is taking place in an exclusively digital format, from Thursday, 27 August, to Sunday, 30 August 2020. Due to the current circumstances, events will not take place on-site in Cologne this year. gamescom is jointly organised by Koelnmesse and game – the German Games Industry Association.