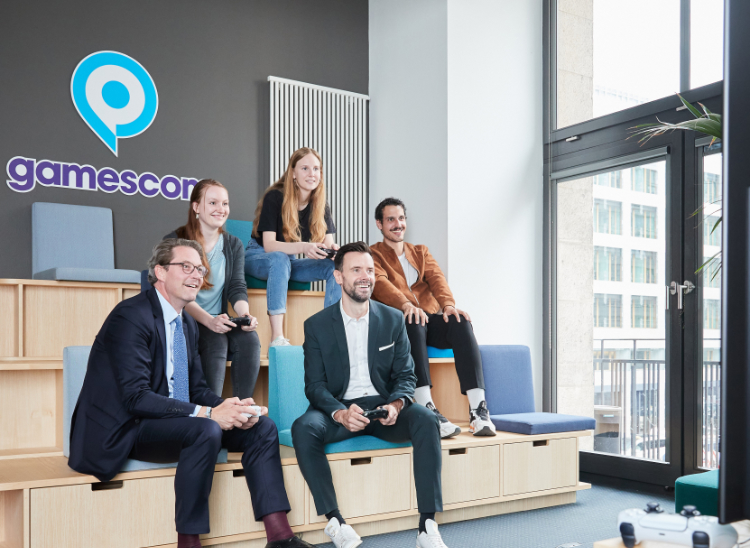 Federal Minister Andreas Scheuer was shown a few of the latest games highlights at the start of gamescom. (Copyright: Sebastian Reuter/Getty Images for game)

Berlin/Cologne, 26 August 2021 – Wednesday at 10:00 a.m. saw the official kick-off: gamescom 2021 was opened by the political guests of honour. The coronavirus pandemic means that this year’s gamescom is being held entirely online, as was last year’s. The official political opening ceremony was also live-streamed. The show lasted around half an hour and was presented from the studio by TV host Katrin Neumann. Ms Neumann spoke to Felix Falk, the Managing Director of game – the German Games Industry Association, which is a joint organiser of gamescom, in between the welcome addresses from the political guests of honour. These included Andreas Scheuer, Federal Minister of Transport and Digital Infrastructure; Dorothee Bär, Minister of State for Digitalisation; Armin Laschet, Minister-President of the federal state of North-Rhine Westphalia; as well as Henriette Reker, the Mayor of Cologne and Chairwoman of the Koelnmesse Supervisory Board, and COO of Koelnmesse Oliver Frese. In their welcome addresses, the political guests of honour embraced this year’s motto of ‘Games: The New Normal’ as they described the huge potential of games for Germany and explained the need to leverage this even further in future. Despite the extensive online programme of gamescom, the hope was expressed that next year could again be celebrated in Cologne with hundreds of thousands of visitors.

The video of the gamescom 2021 political opening ceremony can be watched on demand on the content hub ‘gamescom now’: now.gamescom.global

Andreas Scheuer, Federal Minister of Transport and Digital Infrastructure: ‘As the world’s biggest games event, gamescom is a valuable showcase. We want to build on that and make up lost ground in future as a development location on the international stage. Last year, at this very place, I gave the green light for the second phase of our games funding programme. Since then, the German government has provided millions of euros to support development studios in the games industry. That’s a real breakthrough. As things stand today, funding of 40 million euros has been approved – and we’re looking forward to receiving more applications. As well as the financial aspect, we have also overhauled our strategy and pooled the expertise to form a dedicated games unit within our Ministry. I am a firm believer that we can benefit from the innovative power of the games industry in many areas – be that the education sector, industry and science or simply in our leisure time.’

Dorothee Bär, Minister of State for Digitalisation within the federal government: ‘The motto of gamescom 2021 sums it up: games are the new normal. They have helped us stay in touch with friends and family during the coronavirus phase. Thank goodness we had games during this period! But games aren’t just the new normal as an entertainment medium, but also in the business, medical and education sectors. For example, increasing numbers of companies are “gamifying” their products– from fitness apps through cars up to videoconferencing tools. The deployment of games in education is particularly exciting: the motivation to play has a direct effect on learning success, not only for children, but also in further education and professional development. Games thus harbour immense innovative power that is demonstrated not least by the digital gamescom itself, and we need to exploit this potential even more rigorously. And that’s why we want to give the games sector in Germany even more support to become one of the best locations in the world. With the new games strategy, we have created an excellent basis for the coming years.’

Armin Laschet, Minister-President of North Rhine-Westphalia: ‘gamescom is a shining example of the strong social component of computer and video games, which has helped many people around the world through the coronavirus pandemic. This form of community is a fundamental building block of our society. The games industry also has enormous economic and social potential – both in the classical development of games and also beyond. The best example of this is in the field of digital education: using fun as a way of learning is part of human nature, which is why we need to be better at exploiting the available opportunities and not be afraid of blazing new trails. Here, too, the games industry will play an important role in future. Because of this huge potential, we need to keep working to improve the framework conditions for the games industry. For that reason, in North Rhine-Westphalia we have set ourselves the goal of wanting to become Germany’s top location for computer and video games some years ago. We also need this clear objective at national level in Germany so we can be the best among the international competition.’

Felix Falk, Managing Director of game – the German Games Industry Association, the joint organiser of gamescom, says: ‘gamescom is finally getting started with days full of announcements, news and shows that the fans are eagerly awaiting. Along with our partners, we are creating an event where millions of players around the world will again be able to celebrate the best games out there. However, at the same time, with the German parliamentary elections on the horizon, we don’t just want to talk about games at this gamescom, but also about what is the right games and digital policy for Germany. For that reason, I am especially pleased that we will be welcoming numerous top politicians not only during the political opening ceremony, but also at the Debatt(l)e Royale on Friday. Our intention with such formats is to give the younger generation above all an adequate opportunity to form an opinion, and to send out a clear message: go out and vote!’

Henriette Reker, mayor of the City of Cologne and chairwoman of the supervisory board of Koelnmesse: ‘I am really enthusiastic about what the entire Koelnmesse, the gamescom team, the association game and all partners created together for the second time in a row. This is exactly the innovative spirit and courage we need to move forward as a society in these challenging times. At the same time, I can hardly wait to see the numerous gamers back in town. First, because they always bring a very special flair with them and the whole city is infected by their enthusiasm. Second, because Cologne benefits from gamescom and its fans on many levels: Gastronomy, hotels and retail are just a few of the sectors that get an enormous boost during trade fair times.’

Oliver Frese, COO of Koelnmesse: ‘For the second year in a row, gamescom 2021 will take place purely digitally. But of course we have not been idle since last year and have made huge progress with gamescom 2021 and its digital offerings! Whether it’s our shows, our content hub gamescom now, or community activities like gamescom EPIX – everywhere we’ve taken advantage of the experiences of the last year and a half and further improved our program. Because our objective is clear: We want to be in pole position not only in the trade fair business in general, but also with regard to digital events in the future!’

gamescom is the world’s largest event for computer and video games, as well as Europe’s largest business platform for the games industry. In 2021, gamescom will be an exclusively digital event from Wednesday, 25 August, to Friday, 27 August. Events will not take place on-site in Cologne this year. gamescom is jointly organised by Koelnmesse and game – the German Games Industry Association.

15. July 2021 | Press Release
gamescom 2021 focuses on the societal potential of games for …
‘Games: The New Normal’ is the central theme of gamescom …
This Website uses cookies. By using our service you agree to the usage of cookies.Accept