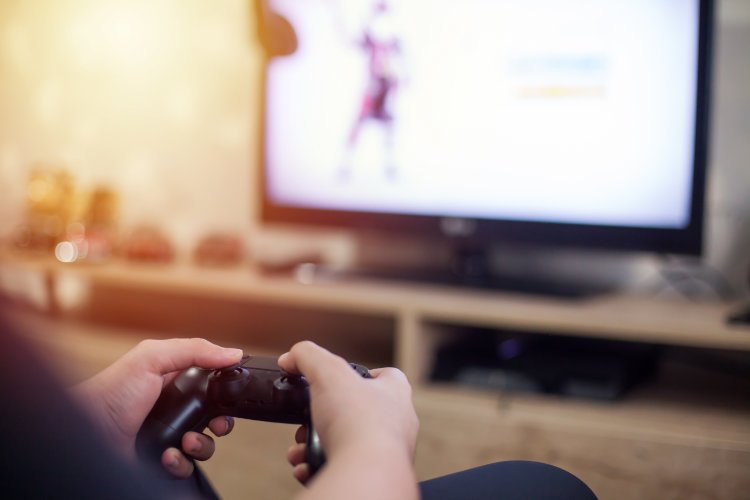 • Game developments from Germany now account for just a 4.3 per cent share of the domestic market
• German games market grows by 9 per cent in 2018

Berlin, 12 August 2019 – While there was once again strong growth of 9 per cent in the German games market in 2018, rising to 4.4 billion euros, the proportion of German-developed games fell to just 4.3 per cent. In 2017, this figure was 5 per cent. These figures were published today by game – the German Games Industry Association on the occasion of the release of the annual report of the German games industry. According to the report, game developments from Germany generated domestic sales of 135 million euros – approximately 6 per cent less than in the previous year. There was a slight increase in the market share of PC and console games on physical media and as downloads, with German productions taking 1.1 per cent of the market compared with 0.97 per cent in the previous year. In contrast, the market share of online and browser games developed in Germany fell from 17 to 13 per cent. The proportion of game apps for smartphones and tablets likewise declined, from 3.7 to 3.2 per cent. 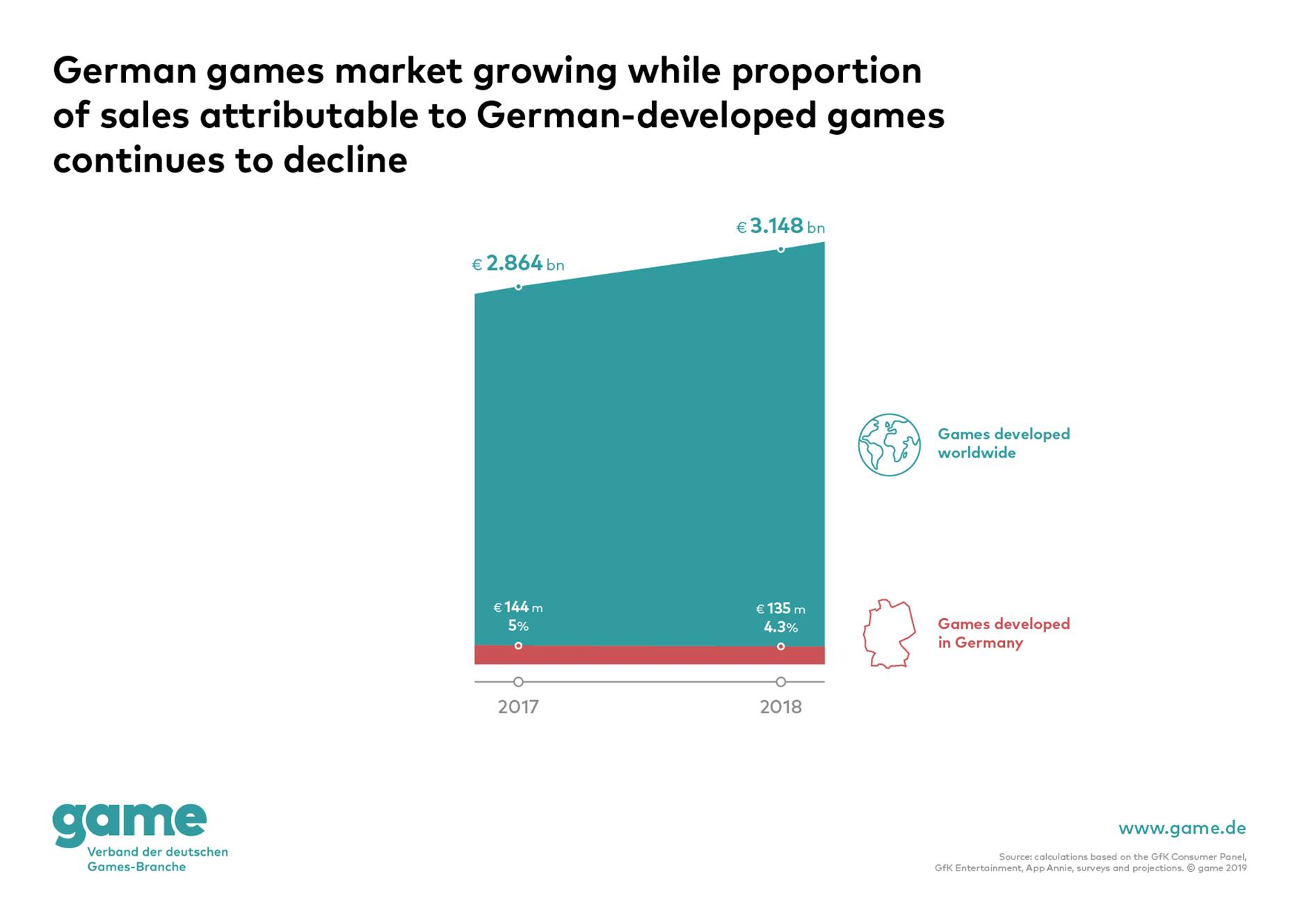 ‘For every 100 euros spent on games, just 4.30 euros goes to companies in Germany. This should be seen as a serious wake-up call! While the games market is recording strong growth in Germany and around the world and has long since surpassed other cultural goods and media, the developments of German companies have only a negligible role to play,’ says game Managing Director Felix Falk. ‘The current situation also highlights the urgency with which the underlying conditions for the German games industry have to at long last be made competitive at the global level. The introduction of games funding is the most important step here, with Germany’s federal government needing to finally provide financial planning reliability. Only then will we in Germany stand a chance of catching up with the leading countries.’ 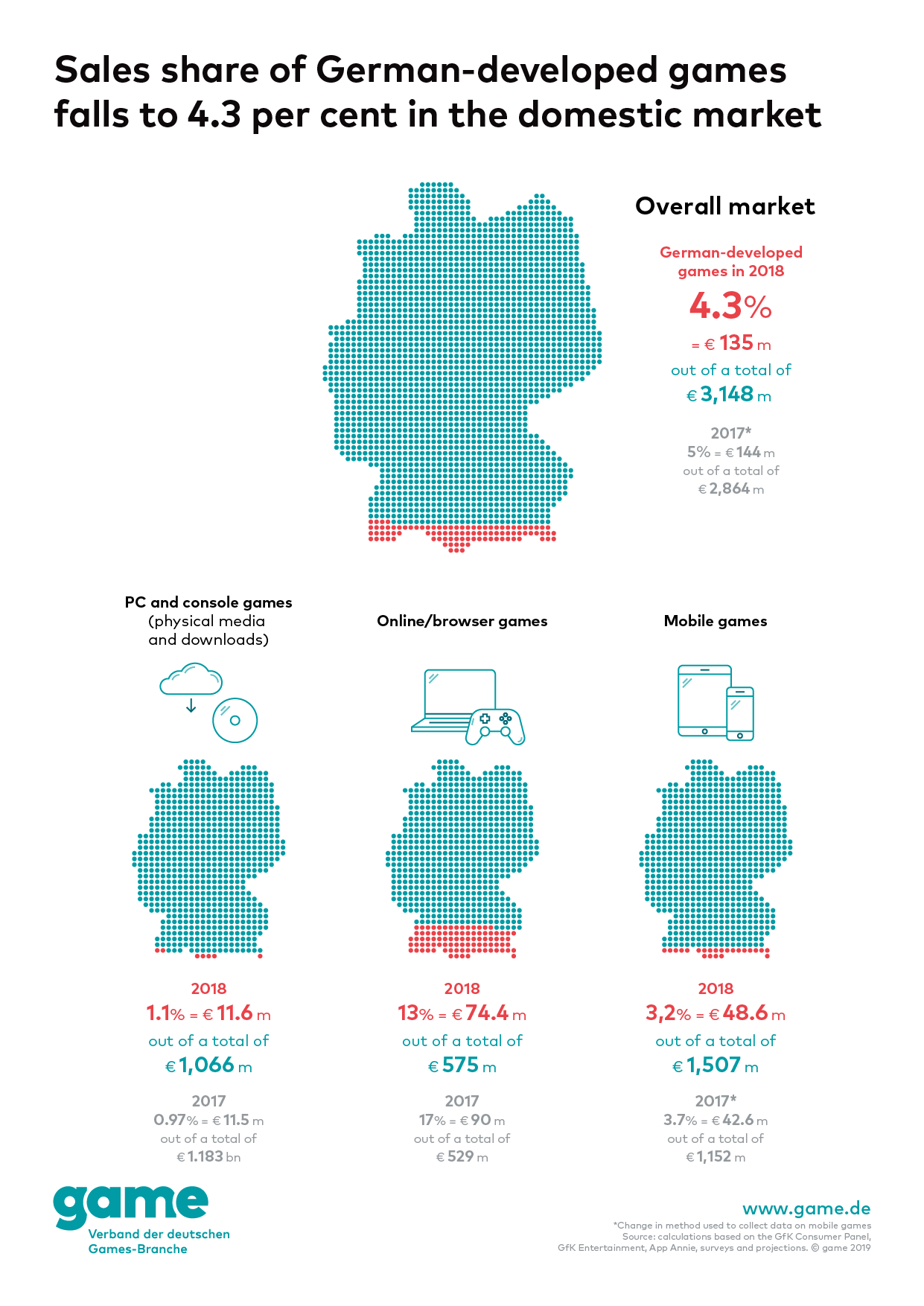 Number of employees falls, games market grows by 9 per cent

The decline in the market share has other consequences – the number of employees at companies that develop and distribute games fell by 5.9 per cent last year to 11,014. The dwindling market share of German game productions and the decline in employee numbers are all the more striking in view of the strong market growth: Germany’s games market grew by 9 per cent to approximately 4.4 billion euros in 2018, as already reported by game. The largest growth driver was online service fees, sales of which almost doubled within a year to 353 million euros (+97 per cent). The market segment of in-game purchases, which includes in-app purchases, likewise contributed greatly to the growth, increasing by 28 per cent to 1.9 billion euros.

Please note that a market share of 5.4 per cent in the domestic market was stated for German-developed games in 2018 last year. We have revised the figure for 2018 down to 5 per cent due to the use of a different data pool for the mobile games market segment and for the purposes of better year-on-year comparability.
The data used is based on surveys conducted by the GfK Consumer Panel, GfK Entertainment and App Annie. The methods used by GfK to collect data on Germany’s digital games market are unique in terms of both their quality and their global use. They include an ongoing survey of 25,000 consumers who are representative of the German population as a whole regarding their digital game purchasing and usage habits, as well as a retail panel. The data collection methods provide a unique insight into the German market for computer and video games.