It’s a thrilling match. For an hour, the world’s two best teams have been facing off, five against five. Their input devices are in constant action, up to 400 times per minute, as each player looks to make the perfect move. They create an atmosphere of absolute focus and high tension. The voice of the commentator races, the viewers can hardly stay in their seats, the arena is trembling. What has the crowd here so enthralled is a final match – between the world’s best esports competitors.

Esports: that’s the name for competition that takes place in computer and video games. In recent years, esports have developed from a niche activity into a mass phenomenon. As recently as the late 1990s, digital sports were largely unknown outside of gaming circles. Today, millions of people watch the competitions via livestreams and in packed arenas. The cash prizes at stake in international championships in some cases run into the eight figures. In many places, esports athletes enjoy a status otherwise reserved for film or pop stars. But what exactly are esports? What are their distinguishing characteristics?

“When you deal intensively with esports, you’re dealing not just with teams, leagues and platforms, but above all with one thing: culture!”
– Toan Nguyen, Founder and Managing Director at Jung von Matt NERD

The term esports (sometimes called electronic sports, e-sports or eSports) denotes competition between two or more people playing computer and video games according to fixed rules. Years of hard, sustained training precede a professional gaming career – pro play demands physical and mental performance at an extremely high level. Esports are based on computer and video games in which individual players and teams – also known as clans – can compete. Esports are thus an embodiment of the core elements of computer and video games and a setting in which important components of games culture can be experienced: digital sports are about the social moment, about playing with one another, coordinating and working together as a team. And esports are just as internationally positioned as computer and video games themselves are. People from around the world can play together at any time. Esports teams have long comprised players from all parts of the globe and tournaments are held internationally.

The most popular esports titles include real-time strategy games and multiplayer online battle arena games (MOBA) like Dota 2 (Valve) and League of Legends (Riot Games), as well as tactical shooters such as ‘Counter-Strike: Global Offensive (Valve)’, Tom Clancy’s Rainbow Six: Siege (Ubisoft), Overwatch (Blizzard), and sports simulations like the ‘FIFA-series’ are also popular, as are racing simulations (SimRacing). Around these game genres, numerous leagues and tournaments have been established over the years in which esports athletes compete at the national and international levels. Events like the League of Legends World Championship, ESL One and The International can fill whole stadiums.

Ever more frequently, even traditional broadcasters like ProSieben MAXX and SPORT1 are carrying the major esports events on television. In January 2019, SPORT1 launched the first esports station in the German-speaking world: eSPORTS1. Millions of viewers also follow the tournaments and leagues via online streaming services like Twitch and Mixer, which have specialised in this content and become an integral part of the esports ecosystem. In addition to this, YouTube and Facebook are increasingly offering esports programming on their platforms. Facebook and the world’s largest esports company, ESL of Cologne, expanded their partnership in February 2019, which will allow esports fans to see all global tournaments on the platform in the future. 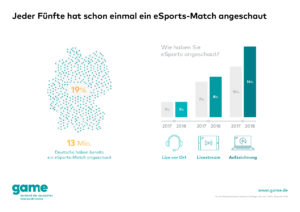 In Germany, a total of nearly 12 million people tune in to watch esports events – meaning that one in five Germans is familiar with this phenomenon, which has evolved from its beginnings in the 1970s with the game Pong through arcade video game competitions and LAN parties to its present state. Almost half of the German population has watched esports games. Talking about esports matches and teams or analysing the latest playing strategies has become as commonplace as discussing a football or basketball game.

“The Esport boom remains unbroken. The Corona pandemic has increased its awareness even greater.”

Accordingly, esports have developed and become professionalised at a breathtaking pace in the last several years. Not long ago, gamers used forums and communities to privately arrange dates to meet and play. These gatherings have given rise to both a professional scene with a global market worth billions of dollars and a professionally organised amateur level. Today there are numerous clubs as well as university groups in which esports enthusiasts can organise locally and regionally. The groups provide opportunities for exchange and joint training. The clubs and groups form the basis for strengthening the local amateur leagues and for promoting young talent – and therefore the German esports athletes of tomorrow. 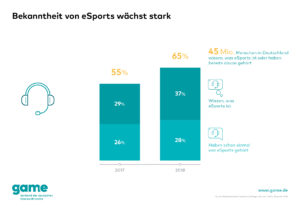 However, for the development of esports in Germany, the right framework conditions need to be created. Some important issues have already been addressed, first and foremost the simplified application process of visas to esports athletes from third countries.

Other framework conditions remain with urgent improvement, however: Above all, the recognition of the non-profit status of local esport clubs is essential so that the amateur level, and thus the foundation for upcoming top players, can develop well. Furthermore, the improvement of the general conditions on the part of the municipalities and federal states is required, if cities in Germany are to profit from the positive economic effects of large international esport tournaments.

Supporting esports players during and after their careers – that is the core mission of the esports player foundation, which was established in 2019. Under the objective “enabling talents to live their dreams and serve as role models,” the epf supports young, ambitious upcoming stars. In 2021, the not-for-profit institution was already able to support 80 players with the intention of positioning them as positive role models for a large crowd among millions of esports enthusiasts.

In addition to the provision of a coach, who optimally accompanies the players throughout their entire career, the esports players receive professional help in topics such as physical and mental health, hardware support, media and interview training, as well as support with everyday matters such as finances and taxes. This way, the players are prepared for their daily lives in top teams, but also for a sustaining future after their career.