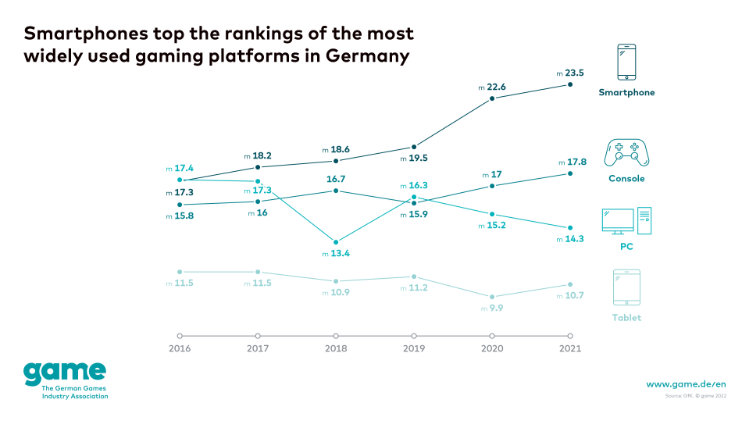 Berlin, 19 July 2022 – Playing video games on mobile devices like smartphones and tablets is more popular than ever in Germany. Once again, smartphones headed the list of the most widely used gaming platforms in 2021. With 23.5 million players – 900,000 more than in 2020 – the smartphone is the most popular gaming platform in Germany. These are the numbers released today by game – the German Games Industry Association, based on data collected by the market research companies GfK and data.ai. Tablet computers gained in popularity as well, rebounding from a decline in 2020 to acquire 800,000 new video game players last year. A total of 10.7 million people nationwide now use the tablet as a gaming device. Whether on smartphone or tablet, mobile gaming as a whole claims around 27.3 million enthusiasts across Germany. And this growth is reflected in the sales figures: the German mobile games market expanded by 22 per cent overall last year.

Video game consoles also gained ground, successfully defending their 2020 ranking of second-most widely used platform: 17.8 million people played on consoles in 2021, 800,000 more than the previous year. The current high popularity of games consoles is reflected in, among other things, the fact that demand for the latest models – such as the Nintendo Switch, the Sony PlayStation 5 and the Xbox Series X/S – still often outpaces supply.

‘Around half of video game players in Germany play on their smartphones every day or almost every day,’ says Felix Falk, Managing Director of game. ‘The technical accessibility, the broad selection of games and the wide variety of free-to-play titles are making mobile gaming more and more popular in daily life. Since virtually everyone now owns a smartphone, many people are now being introduced to the world of gaming very casually and effortlessly. And the demand for consoles hasn’t let up, either. Their great popularity can be seen in the sustained demand for them, which suppliers often can’t keep up with.’ 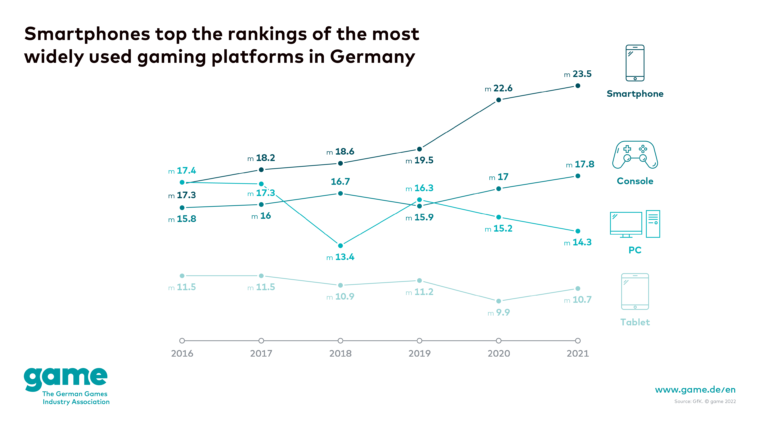